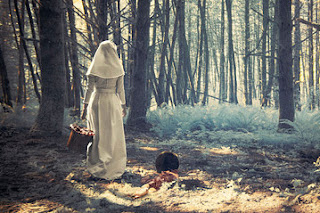 Thank you, thank you , thank you FX for making this episode of American Horror Story Asylum SO much better than the last! This week is like holding a torch up under your chin and telling ghosts stories around a camp fire until someone pees themselves with fright.

So Sister Mary Eunice (Lily Rabe) is possessed by the devil, and my what a wonderful job she does of playing the role. Not only is she deliciously creepy, but she is messing with Sister Jude's (Jessica Lange) head. It seems the devil knows all about Jude's hit and run fifteen years earlier (another great ghost story to tell by the fire) and is hell bent on reminding her of this fact. Sister Jude, as a result seems to be 'coming apart at the seams' (as the horrible Dr. Arden (James Cromwell) so eloquently puts it).

She is not the only one loosing it though. Dr. Arden himself gets seduced by Sister Devil Eunice and flips out; one statue gets tarted up with lipstick and smashed as a result. In his more lucid moments though, the good doctor pokes and prods Kit (Evan Peters) in an attempt to introduce conspiracy theories into American Horror Story Asylum - you can't have a nut house without at least a few of these!

Speaking of Kit, he is still attempting to escape with Grace (Lizzie Brochere). When a movie night is planned during the freakish storm that is ominously working it's way through this episode, they realise it is the perfect time to try again. Shelly the nymphomaniac (Chloe Sevigny) wants in and eventually convinces them to let her come with them. Even Lana (Sarah Paulson) gets a second chance once she has words with Dr. Thredson (Zachary Quinto) and realises that her girlfriend, Wendy (Clea Duvall), may be in danger. She also realises that maybe Kit isn't the serial killer Bloody Face. Oops, hopes she apologises for the caning he got as a result!

We also start to learn more about the creature that Sister Devil Eunice keeps feeding in the forest. In fact, we discover there is more than one of them and apparently they only need to be fed over winter. These creatures turn out to be a crucial plot point this week. not only does one of the patients (who identifies the fact that Sister Eunice is possessed by the devil) get fed to them, but when Kit, Grace and Lana attempt their escape (with the help of Shelly, but more on that later), they encounter these creatures and as a result end up back in the very tunnel they used to escape through! Sister Jude also uses the (now noticed) escapees as a reason to get rid of a few other missing patients by claiming SIX people have escaped instead of only four. 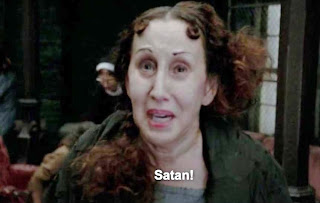 So, Shelly wants to escape. She actually stops thinking about sex for long enough to act as a look out. Her favour with the male staff is definitely to her advantage and we find her back on the sex bandwagon as soon as needed. Once Carl the orderly is distracted, Shelly realises that her need to escape is more important than her need for sex, so the poor man is left wanting. Unfortunately it is too little, too late and Shelly jumps straight out of the frying pan and into the scorching flames of hell (read: Dr. Arden). It seems the poor doctor is still toey. Shelly is actually forced to put out. Or at least until Dr. Arden has a 'little accident'. Shelly finds this hilarious, as a result, Dr. Arden gets pissy and poor Shelly also meets with a little accident.....

Sister Jude is not coping well and as a result gets completely inebriated. She staggers around the abandoned halls in search of someone only she appears to see. Now would have been an awesome moment to put in a time change. The other would have been when Kit, Lana and Grace are escaping back INTO Briarcliff, but these small details were the only set backs in this episode.

Although, if you were to speak to Shelly in the last scene, she may disagree, since we find her minus the lower half of her legs and still in the care of Dr. Arden.....


Can't WAIT for the next episode!

Was this week as good for you as it was for me?

Posted by Rachel Tsoumbakos at 22:30