This book is what Twilight was when it first hit the book circuit all those years ago. It was considered a little bit of bad in a world that is being overly policed. In the Nanny state we now reside we are constantly being told how to raise our children, when (and how, and even if) we can discipline them, What we can read/say/watch (is anyone going to admit they own a gollywog?) and even where we can smoke! Books are now a way to be bad without getting into trouble for it. Naughty boys who bite suddenly became all the rage.

Books such as Twilight started to filter in as a way for us to buck the trend without being seen as politically incorrect. As a result, every next book after Stephenie Meyers came complete with black covers and a vampire who was lovelorn. This led to my next theory. We all love a bad boy, but what we love more than that is a broken bad boy. Women love to fix things. Enter: Christian Grey.

While waiting on a friend to finish (and then pass on) the third novel, an opportunity arose. I was offered a manuscript to proof read; 'Catalyst: Stories of Awakening'. This manuscript belonged to a friend of mine, KL Joy. I knew her genre was Erotica, but after reading a few chapters of her novel, I realised that she may just be the very person to help me in my task.

If you see any likeness to yourself - wear it with pride.

If you want deniability, refer to the above comment."
*Thank you so much for allowing me to step inside your world, it was certainly an honour. Finally, how can people get a hold of your novel?
My eBook is available as of 22nd June 2012 through www.darempiremedia.com (Just do an author search for 'KL Joy' )
It's available on Amazon: Catalyst: Stories of Awakening
as well as Smashwords.
Or visit www.kljoy.com for information on the print version.
If you want to get in touch with KL Joy on Social media then follow the links below:
Facebook: KL Joy (Author Page)
Twitter: @KL_Joy
Blog: The Author KL Joy

#MelbQuake - Finally We Have One!

So Melbournites can finally claim they survived an earthquake! In fact within an hour, you could buy the T-Shirt: 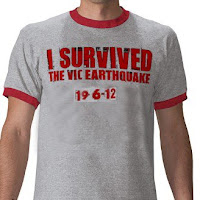 Now this is what I love the most about people from Melbourne - their ability to poke a stick in the fire and stir things up. While the references to Federation Square and toppled deck furniture is wearing thin, there is some seriously funny shit out there on Twitter. Here are my personal faves:

Posted by Rachel Tsoumbakos at 08:11 No comments: