See you all there!
Posted by Rachel Tsoumbakos at 18:54 26 comments:

So, where to start? In episode 5 of FX's American Horror Story Asylum, we find out our dear Anne Frank (Franka Potente) is just delusional - or is she? Well, we won't find out now since she was returned to her dear husband. He was concerned enough to search and locate her. He was even worried enough to divulge a whole heap of back story. Then, after only a short amount of time, he has her recommitted to Briarcliff!
And this is really the first time we start to feel that maybe Sister Jude (Jessica Lange) isn't as bad as we first thought. She pleads with the husband of Anne/Charlotte and begs him to look after her, even offering advice as to how he should go about it. The husband can't cope and agrees to let Dr. Arden (James Cromwell) perform a lobotomy on his wife - WHICH HE THEN PROCEEDS TO WATCH! Anne becomes Charlotte after that and it's a 'Leave It To Beaver' moment.
Sister Jude is convinced her job is over after not only losing patients during the storm (and let me get to Pepper later on), allowing Anne/Charlotte to go home after shooting Dr. Arden (who says he will press charges against Sister Jude for this) and then (as the last straw) finding out Lana (Sarah Paulson) is missing. She returns to her previous life as a result. Hello hooker! 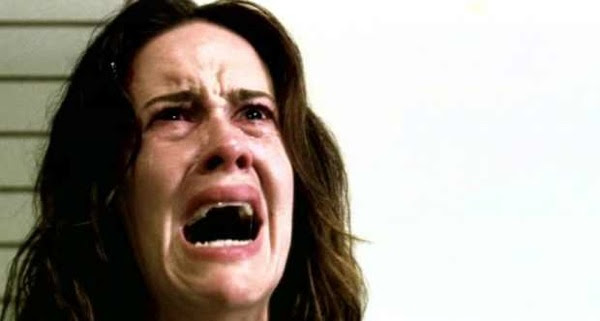 Speaking of Lana, she has managed to escape the evil clutches of Briarcliff by ending up in the evil clutches of Dr. Thredson (Zachary Quinto). He takes Lana back to his house and it's obvious as soon as he turns on the nipple lamp and offers Lana a brain mint from the skull bowl that he's Bloody Face. Lana catches on just as quickly, Dr. Thredson is smarter than that though and Lana ends up in a secret room that can only be described (to use another horror movie plot yet AGAIN) as something out of Saw. Just when you think it can't get any worse for Lana, she discovers Dr. Thredson has been saving up her girlfriend, Wendy (Clea Duvall). Imagine what it feels like to wake up to the defrosting corpse of the person you love? Then Dr. Thredson gets all super creepy and announces it's time for necrophilia - all in the name of aversion therapy though. Man, is HIS back story gonna be interesting!
What about the good Sister Eunice-Devil (Lily Rabe)? Well, she seems to covering up for Dr. Arden and hides Shelley (Chloe Sevigny) the Nymphomanical-mutant-monster in the woods (or so the Doc thinks). She give Kit (Evan Peters) a 'Get Out of Jail Free' card by announcing he'll be avoiding sterilisation, but then lets Grace (Lizzie Brochere) know she will still be going under the knife and getting sterilised. I'm starting to think that maybe she isn't the devil any more, just a well placed alien plant.
Yes, you heard right. We're back to the alien story line in this episode. After her surgery, Grace is convinced that Kit's wife is still alive and we even see snippets of alien probing going on. Of course this is no help to Kit who has been promised amunity from the electric chair by Dr. Thredson. Well, guess who's a liar? Yep, Kit is arrested and will be tried as a sane person.
Now, what about Shelley, you ask? Well, (and this is why I think maybe Sister Eunice may be nicer than we first thought) Sister Eunice 'hid' Shelley in the stairwell of a school. She has been discovered, so it will be interesting to see how she helps on the outside.
And, finally, I want to know what is going on with Pepper (Naomi Grossman). She went missing during the storm and has been unaccounted for since. This is an intriguing little mystery that will no doubt play out later on in the season. On a side note, is it just me, or was anyone else wondering what the actor who plays Pepper looks like in real life? Well, here's one of her professional shots from IMDb: 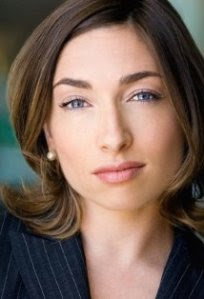 Does anyone else think the show feels like it's peaked too early? We're only 5 episodes in after all.

(Photo Credits: FX and IMDb.com/Vanie Poyey)
Posted by Rachel Tsoumbakos at 05:52 No comments: