A great author friend of mine, Sarah Billington, is having the most spectacular Labor Day Sale on Amazon this weekend. You can check out her fabulous deals by either following the links below or checking them out on her Facebook page. Two of her books are available for free download straight to your Kindle and the other is only 99 cents - that's right, three books for only 99 cents!

Go on, spoil yourself this weekend! You know you want to ;-)

Life Was Easier When Boys Were Stupid

Posted by Rachel Tsoumbakos at 22:53 2 comments:

So tomorrow is the Season 5 finale for HBO's True Blood. Being a writer for the TrueBloodNet fan site, this means a bitter-sweet moment for me. Firstly, it means my writing load eases again. For the twelve weeks while the show airs, I am busy writing the episode recaps and keeping on top of what's going on in the Sookieverse. Secondly, it means the show is over and I have to wait until the following June to get my next Bon Temps fix!

Of course, finale night means party night also! This year there will be Tru Blood Plasmapolitans (Tru Blood, Vodka and lime juice) as well as a good dose crying - which of course means Sookie's gran's famous Cryin' Pie! For those of you who haven't been bitten by the True Blood bug, in Season 1, Sookie's gran met an untimely demise. As a result, Sookie proceeded to work her way through half a pecan pie she found in the fridge that gran had made before meeting her bloody end. Needless to say, she blubbered her way through the entire thing!

This year, I have attempted to replicate gran's pie. I think I've come pretty darn close. So here is the recipe for you all to enjoy. If you want a more authentic version, omit the maple toffee.

Recently, on a whim, I entered my cover art of the The Ring of Lost Souls into The Bookplex's Book Cover Contest. Not thinking I would do very well, I promptly forgot all about the contest. 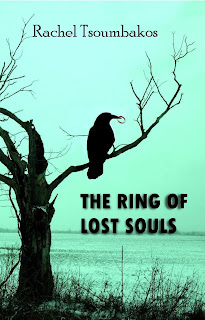 Last week I received an email notifying me of my cover's place in the FINAL TWELVE! Yes folks, my humble little cover was considered one of The Bookplex's fave covers. So make sure you head over to their website and show it lots of love. Voting starts today and you need to get in early so as not to miss out on your chance to vote for your favourite!

You can vote on the website here. All the cover art can be found here.

There are prizes on offer, so make sure you vote, as well as let all your friends know about this fabulous offer.

Posted by Rachel Tsoumbakos at 16:25 No comments:

Email ThisBlogThis!Share to TwitterShare to FacebookShare to Pinterest
Labels: contest, Cover art, Scare Our Pants Off competition, The Bookplex, The Bookplex Book Cover Contest, The Ring of Lost Souls

When I first wrote Emeline and the Mutants I had no idea that I was using politically correct terms in it. While in Australia it is okay to refer to someone who is small in stature as a midget, I was soon to discover that to other countries, this is a BIG no-no.

Now any 'Find and Replace' function can be used to change the offending word to dwarf, but here is where it gets tricky. In Emeline and the Mutants I have several types of mythical creatures. While there are no dwarfs (as in creatures similar to gnomes) in the story, when I described Emeline's friend, Gwennie, as a dwarf, people might automatically assume I am taking about a magical creature and not a human being who is less than regular height. After all, just off the top of my head, the following creatures turned up in my book: humans, vampires, werewolves, trolls, fairies, witches, mermaids and harpies. It was easy to make the mistake with a list like that.

So what is one to do in this sort of situation? I was tempted to just leave in the references to midgets and cop the flack, but since I used those words unintentionally, I didn't really want to inadvertently put people off my books. If I were planning to offend or cause a ruckus (as I am doing now with the title of this blog), then to hell with all the precious souls out there and the word would have stayed, but I wanted a word that was descriptive and not confusing to the reader.

Finally, I settled on little people. Am I happy with the term? No, I'm not. To me, personally, I find this descriptive more offensive than midgets. If I were a dwarf and someone called me a little person, I would be tempted to punch them at waist height. Really, the phrase reminds me of the reference to 'teacup humans' in True Blood.

But, at the end of the day, this is the least offensive and least confusing word to use in the make believe world that Emeline lives in. So why don't you check out what all the fuss is about by downloading the new and improved version of Emeline and the Mutants today - it even has shiny new pictures in it!

Available on now on Amazon.