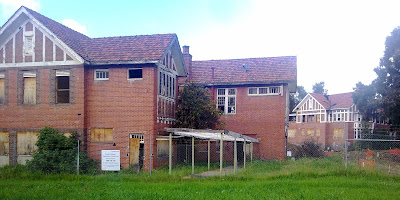 When I was writing The Ring of Lost Souls, I used an actual location for inspiration. Larundel is a now defunct mental facility based in Bundoora, Australia. This institution is renowned for being the home of some of the meanest, criminally insane people in Australia. Heinous serial killer Peter Dupas served time there, so did many unnamed men and women who were considered a threat to society. It is also known as the birthplace of the drug Lithium.

All the urban legends and ghost stories migrate towards the mentally incapacitated tenants of this institution in The Ring of Lost Souls and I used many of these myths to create the fabric of my story. Some of these stories, I even expanded upon. The small girl who was fond of her music box and died in Larundel was the inspiration for my ghost Maisy, who is an adult, but small in size. The music box turns out to be crucial to my main character, Isobel, who needs it to discover her past. Incidently, the name Maisy was actually inspired by another ghost story; Nelly, who is the only ghost wanting people to know her name. And, with all the speculation over whether a morgue ever existed in Larundel was the very reason I had to place one in my story! However, none of these stories tell of the other people who inhabited Larundel. People who were not considered disabled in any way. In this first part, I will be dealing with these forgotten groups.

Mont Park was originally built at the start of the twentieth century. It was designed to provide a self-sufficient environment that was less 'instituted' than what was currently available. Larundel is a smaller part of Mont Park and was developed, originally, to replace the outdated Kew Mental Hospital.

Work began and by 1938, the administration building (while this building is the oldest of the Larundel group, it no longer exists, having been burned down in 2005), four wards and the main hospital building were erected. However, there was no power or sewerage connected yet. Even with these shortfalls, there was a rush to finish the works since the Children's Welfare Depot and Travancore Departmental Centre both wanted to use the premises. Both departments were concerned that, since World War two was occurring, and these two buildings were situated near possible military targets, the children needed to be evacuated. Other government departments also wanted these two buildings for munition workers.

For several years, while work was still being completed on Larundel, there were see-sawing opinions on who would use Larundel and why. By 1942, it was decided that Larundel was too far away from the court system used by the Children's Welfare Depot, so these children were no longer considered for the first inhabitants of Larundel. There were still all intents to use the buildings for the mentally incapacitated at Kew Cottages, but until all the buildings were complete, this was considered impossible.

The R.A.A.F. were the next to consider Larundel. Air Vice Marshall V. Hurley wanted to use the facility as an R.A.A.F. hospital. The government agreed, but by the end of 1942, it was decided the No. 1 W.A.A.F. Depot (Training Depot) would in fact use the buildings until the war ended, and possibly for up to a year afterwards.

So, in 1943, Larundel got its very first inhabitants. Between 1943 and the end of R.A.A.F. control in December of 1945, five thousand people trained at Larundel. Paul Savage, a medical orderly, remembers this time fondly:

"The area around was basically rural...The young trainees would often walk from Preston across the paddocks. Their 'return from leave' route would take them past the Preston cemetery, the Mont Park vegetable garden and the marshy area of the Mont Park farm. Trainees returning to camp late on a Sunday evening would encounter horses grazing. The horses were inclined to follow their human visitors and many a city lad got the fright of his life in the darkness near the cemetery at the sound of hooves to his rear."


Now the Netherlands Indies Welfare Organisation for Evacuees wanted to use Larundel to house refugees from the Dutch East Indies. This possible use was quickly rejected since the logistics of shipping and arranging evacuation from the war-torn area was proving difficult. So, in 1946 the acting superintendent of Mont Park, Dr. L.L. Lovett was told the site would be used for emergency housing. On 26 April 1946, the first civilian moved into Larundel.

Larundel was partitioned off inside the existing building and flats were created. Two rooms were also set aside for Bundoora State School No. 4631, although its exact location within the complex is unknown. This school operated between 1947 and 1949. While people were now leasing rooms, the facility was still being built with the intention of it being used for mental illness. While only existing wards could only bed 320 patients, it was envisioned to eventually have enough buildings to house 1000 patients.

The most famous real building of Larundel is probably the main hospital ward. Many people believe that Larundel housed a morgue. While there is much speculation, and one was supposed to be built, the morgue actually existed in the Mont Park section. The hospital is most often remembered as the building that held many of the sickest people. It did indeed do this, but what a lot of people don't realise is the fact that one floor of the building was originally designed as nursing staff quarters. By 1947 this floor could accommodate up to eighty nurses.

In 1948, the decision to move people from Kew Mental Hospital, was bought to the forefront again. People were now being shipped out of Larundel and sent to Warrnambool Mental Hospital for emergency accommodation. More buildings, including a church, were proposed for Larundel, although some of these were never built. The existing buildings were relegated as such:


Many of these buildings still remain today and are listed on the Victorian Heritage Database. These buildings are now safe from demolition.

The start of 1949 saw only fifteen families living in Larundel and by November of that year (21st to be exact, ten days after the proposed opening date) these people were moved out and the first mentally ill patients moved into Larundel. Even at this stage, there was still work to be done. A lack of airing courts, staff accommodation, laundry and mortuary services had still not been addressed. A lack of fencing was also a concern, so Larundel was temporarily re-named Mont Park and 30 male patients who were considered to be 'suitable reliable' moved into the facility.


Posted by Rachel Tsoumbakos at 21:54